This document describes how to use Open Virtual Networking with Kubernetes 1.8.0 or later. This document assumes that you have installed Open vSwitch by following INSTALL.rst or by using the distribution packages such as .deb or.rpm.

OVN provides network virtualization to containers. In the “overlay” mode, OVN can create a logical network amongst containers running on multiple hosts. In this mode, OVN programs the Open vSwitch instances running inside your hosts. These hosts can be bare-metal machines or vanilla VMs.

Installing Open vSwitch is out of scope of this documentation. You can read INSTALL.rst for that. That documentation in turn links to platform specific installations. If you use packages to install OVS, you should install both OVS and OVN related packages. You can also read the following quick-start guide for Ubuntu that installs OVS and OVN from source and packages: INSTALL.UBUNTU.md The following guide explains setting up an OVN overlay network on Openshift running on RHEL/Centos/Fedora: INSTALL.OPENSHIFT.md

On each node, you should also install the ‘ovnkube’ utility that comes with the ovn-org/ovn-kubernetes repo. To compile it, you will need golang installed. You can install golang with:

You need to set your GOPATH, clone the ovn-kubernetes repo, compile and install it.

Note that, you need not do the above compilation on every host. You can copy over the compiled binaries to other hosts. We will have the option to run OVN via kubernetes daemonsets soon.

OVN is a network virtualization solution. It can create logical switches and routers. One can then interconnect these switches and routers to create any network topologies. Kubernetes (k8s) in its default mode has the following networking requirements.

k8s has this requirement for health-checking. To achieve this goal, we will create an additional logical port for the node (represented by a OVS internal interface).

This can be achieved by running OVN gateways on the nodes. With at least one OVN gateway, the pods can reach the k8s central daemons with NAT.

Run the following commands to open up the TCP ports for OVN Northbound and Southbound ovsdb-server. The clients will connect to the respective database at its port.

Also start ovn-controller on this node.

Now start the ovnkube utility on the master.

The below command expects the user to provide

Note: Make sure to read /var/log/ovn-kubernetes/ovnkube.log to see that there were no obvious errors with argument passing. Also, you should only pass “-init-node” argument if there is a kubelet running on the master too.

If you want to use SSL instead of TCP for OVN databases, please read INSTALL.SSL.md.

On each host, you will need to run the following command once.

In addition to the same variables explained in the previous step, if you are using ingress controllers with L7 load-balancing to enter into the k8s cluster, you can skip providing the ‘-nodeport’ option with the below command.

Note: Make sure to read /var/log/ovn-kubernetes/ovnkube.log to see that there were no obvious errors with argument passing.

For both master and node initializations above, ovnkube will create an OVS bridge on top of your physical interface and move the IP address and route information from the physical interface to OVS bridge. If you are using Ubuntu and OVS startup scripts are systemd (e.g: there is a file called /lib/systemd/system/ovsdb-server.service) , you will have to add the following line to /etc/default/openvswitch

For more control on the options to ovnkube, please read config.md

The following digaram represents the internal architecture details of the overlay mode. 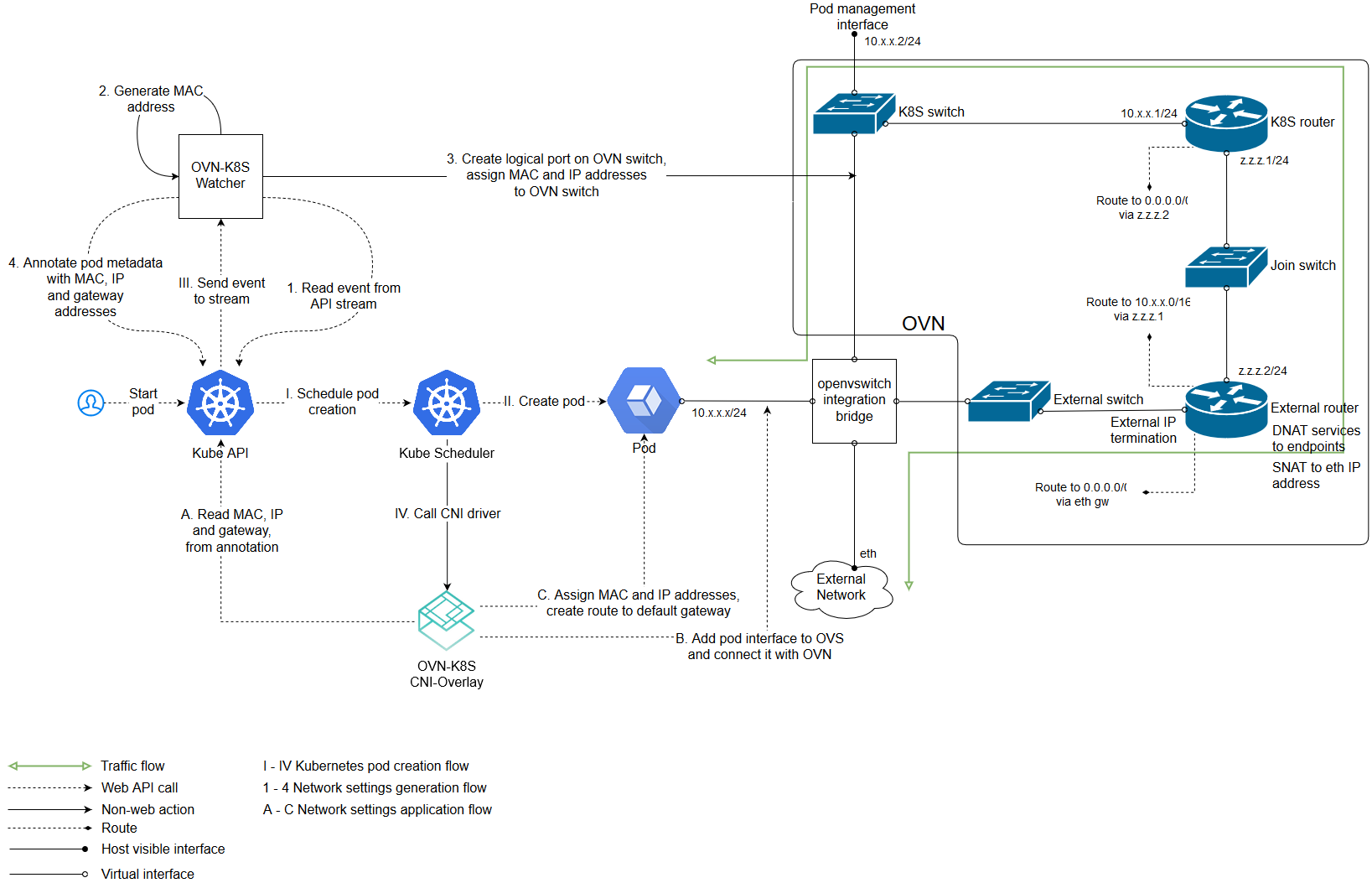 Installing k8s is out of scope of this documentation. You can read README.K8S.md for that. For a quick start, the vagrant in this repo, does install kubernetes in its simplest form.